The delay in arresting Mr. Zimmerman after the death of 17-year-old Trayvon Martin led to nationwide protests and accusations of racial injustice. 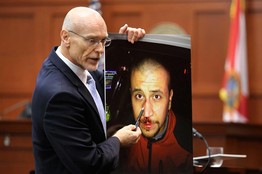 Defense attorney Don West showed a photo of the defendant from the night of the incident, saying he ‘took quite a wallop squarely in the face.’ Associated Press

Prosecutors allege Mr. Zimmerman, who is 29 years old and Hispanic, pursued Mr. Martin and set off a deadly confrontation. Mr. Zimmerman told authorities he was attackedby the teenager and fired at him in self-defense. He has pleaded not guilty to second-degree murder. A six-person, all-female jury will decide whether to convict him.

Prosecutor John Guy depicted Mr. Zimmerman as an angry, aspiring cop who spun a “web of lies” to defend his actions. He opened with a jarring recitation of profanities Mr. Zimmerman uttered in a call to police the night of the incident to report Mr. Martin’s “suspicious” behavior.

“F– punks. These a–, they always get away,” Mr. Guy said. “Those were the words in that man’s chest when he got out of his car armed with a fully loaded semiautomatic pistol.”

Mr. Guy said Mr. Zimmerman profiled Mr. Martin “as someone who was about to commit a crime in his neighborhood.” The prosecutor went on to highlight what he called numerous flaws in Mr. Zimmerman’s description of events. Among them: his contention that the teenager attacked him shortly after he ended his first call to police, when cellphone records show several minutes elapsed.

In contrast to Mr. Guy’s opening statement, which lasted a half-hour, the one by defense attorney Don West stretched more than two hours and involved a detailed dissection of the night’s events.

He started off with a knock-knock joke that failed to elicit any laughter in the courtroom. “George Zimmerman who?” he said. “All right, good. You’re on the jury.” He seemed to be referring to the widespread news coverage the case generated and the difficulty of seating a jury that hadn’t heard anything about it. After a lunch recess, Mr. West apologized to jurors for the joke.

“This is a sad case,” Mr. West told jurors. But “there are no monsters here.” Mr. Zimmerman, he said, “shot Trayvon Martin in self-defense after being viciously attacked.”

Displaying a photo taken the night of the incident that showed Mr. Zimmerman with a bloody nose, he said the defendant “took quite a wallop squarely in the face.” He also played a recording of a neighbor’s 911 call in which screams from the altercation can be heard in the background.

The call was the subject of a lengthy pretrial hearing about whether jurors would be allowed to hear testimony from state audio experts, who said the screams were not Mr. Zimmerman’s. Over the weekend, Circuit Judge Debra Nelson ruled in favor of a defense motion to bar such testimony from being introduced.

Mr. West wrapped up his remarks by questioning whether Mr. Martin was unarmed, alleging the teenager bashed Mr. Zimmerman’s head against the ground. “Trayvon Martin armed himself with the concrete sidewalk,” he said.

Some legal analysts said the prosecution’s opening statement was powerful and cogent, but noted that Florida’s self-defense laws present a high hurdle to secure Mr. Zimmerman’s conviction. In general, analysts seemed more impressed with the prosecution’s than the defense’s statement.

Not only did Mr. West’s joke start the defense off on an unsteady foot, but his sometimes rambling delivery may have confused jurors, said Jules Epstein, a professor at Widener University School of Law. “Openings are not avalanches,” he said. “Brevity is better. Narrative is better.Focus is better.”

But Mary Anne Franks, a professor at the University of Miami School of Law, said prosecutors risk appearing “bullying” if they go too far in attacking the defendant’s use of obscenities and alleged character flaws.