A jury acquitted George Zimmerman on Saturday night of all charges in the death of Trayvon Martin, bringing to an end a case that set off nationwide protests and searing debates over racial justice and self-defense laws.

SANFORD, Fla.—A jury acquitted George Zimmerman on Saturday night of all charges in the death of Trayvon Martin, bringing to an end a case that set off nationwide protests and searing debates over racial justice and self-defense laws.

Mr. Zimmerman, a 29-year-old former neighborhood-watch volunteer who is Hispanic, fatally shot the 17-year-old, who was unarmed and black, in a gated community here last year. The defendant faced a second-degree murder charge, which carries a maximum sentence of life in prison, and the lesser charge of manslaughter, which carries a maximum 30-year sentence.

The six female jurors, who were sequestered during the three-week trial, reached the decision on their second day of deliberation at the Seminole County courthouse. They had to weigh the testimony of more than 50 witnesses and evaluate hundreds of pieces of evidence. 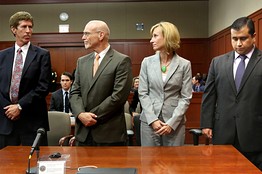 At the moment the verdict is read, George Zimmerman, far right, looks down as his defense co-counsel, Don West and Lorna Truett look at Zimmerman’s lead defense attorney Mark O’Mara, far left, as he is found not guilty. European Pressphoto Agency

State prosecutors Bernie de la Rionda and Angela Corey answer questions after George Zimmerman was found not guilty of all charges in the shooting death of Trayvon Martin.

Natalie Martin, an attorney for the family of Trayvon Martin, thanks the family’s supporters and reacts to the jury’s verdict in the trial of George Zimmerman for the shooting death of Mr. Martin.

After a jury found George Zimmerman not guilty of all charges in the shooting death of Trayvon Martin, Mr. Zimmerman’s defense attorney Mark O’Mara said in a news conference that the media and state justice system failed his client.

Prosecutors accused Mr. Zimmerman of profiling Mr. Martin as a criminal, following him and triggering the confrontation that ended with the teen’s death. Defense lawyers argued that Mr. Martin was the aggressor, punching Mr. Zimmerman in the face, scuffling with him on the ground and bashing his head against a concrete walkway.

Throughout the trial, both sides presented dueling portraits of Mr. Zimmerman. His lawyers depicted him as a dedicated member of the community who repeatedly offered help to his neighbors. They also called witnesses who testified that he was a bumbling fighter who would have succumbed to Mr. Martin in a brawl, despite weighing more than him.

Prosecutors, on the other hand, cast Mr. Zimmerman as an aggressive vigilante who was angry about a recent string of burglaries in the neighborhood and determined to go after any potential troublemakers. They repeatedly quoted profanity-laced comments he made on a phone call to police about “punks” who “always get away.”

Despite all the evidence and witness testimony presented, though, key details of what happened the night of Feb. 26, 2012, remain elusive. Mr. Martin was walking back to his father’s girlfriend’s home when Mr. Zimmerman spotted him and called police to report a “suspicious” person. When a police dispatcher asked Mr. Zimmerman if he was following him, he replied, “Yeah.” The dispatcher said that was unnecessary.

What happened next is unclear. At some point, the two tussled, but no witnesses saw who started the fight. That left lawyers on both sides to try to fill in the blanks. Prosecutors called to the stand Rachel Jeantel, a friend of Mr. Martin’s who said she was on the phone with him moments before he was killed.

Defense lawyers sought to discredit her testimony by highlighting what they claimed were several lies she told. In presenting their case, they floated the possibility that Mr. Martin lay in wait for Mr. Zimmerman and assaulted him.

Another critical question that was never definitively answered: whose screams could be heard in the background of a 911 call on the night of the incident. Prosecutors called witnesses who claimed they were Mr. Martin’s, while defense lawyers put on witnesses who said they were Mr. Zimmerman’s.

Both sides also wrangled over the severity of Mr. Zimmerman’s injuries, including a bloody nose and lacerations on the back of his head. Prosecutors minimized them, calling to the stand a medical examiner who described them as “very insignificant.” But the defense summoned expert witnesses who testified that the pounding Mr. Zimmerman took was serious enough to make him fear for his life.

In his closing argument, defense attorney Mark O’Mara urged jurors not to make assumptions in a case riddled with uncertainties. “You can’t fill in the gaps,” he told them. “You can’t connect the dots for the state attorney’s office.”

In the end, jurors had to contend with murky evidence and sharply conflicting versions of events. Considering the verdict they rendered, the defense appeared to raise sufficient doubts about the strength of the prosecution’s case.

The jurors, whose identities remained secret under court order, declined to speak to reporters after the verdict.

At back-to-back press conferences after the verdict, the prosecution and the defense continued some of the sniping that characterized their battle in the courtroom.

Authorities in Seminole County and South Florida, where Mr. Martin lived, continued to urge the public to remain peaceful once the jury rendered its decision. So, too, did family members on both sides.

“From the onset of this tragic event, our family has been clear to express our trust in the judicial system,” said Robert Zimmerman Jr., the defendant’s brother, in a statement Friday. “We hope now that as Americans we will all respect the rule of law.”

Benjamin Crump, an attorney for Mr. Martin’s family, likewise called for any demonstrations to remain calm. “For Trayvon to rest in peace, we must all be peaceful,” he said.

Defense attorney Don West, meanwhile, voiced his displeasure with the course of the proceedings.

“I think the prosecution of George Zimmerman was disgraceful,” said Mr. West, who repeatedly complained before and during the trial about alleged delays by the state in handing over evidence. “As happy as I am for George Zimmerman, I’m thrilled that this jury kept this tragedy from becoming a travesty.”

His partner on the defense, Mark O’Mara, chastised the media for depicting Mr. Zimmerman as a monster and lamented that the case became ensnared in racial issues. “This became the focus of a civil-rights event,” he said. But “it was a self-defense case.”

Assistant state attorney Bernie de la Rionda was visibly tense as he commented on the case. “Who was following who? Isn’t that what this case boils down to?” he said. “I respect the jury’s verdict, but really what it boils down to is a kid minding his own business being followed by a stranger, and I would submit that’s when it started.”

A spokeswoman for the Seminole County Sheriff’s Office said late Saturday night that the department hadn’t received notice of any disturbances in the area.